After completing some temporary copper piping ( I couldn't wait for the bronze to crawl here), it was time to fire it up. Several days before, the boiler was filled, a little oxygen scavenger added and I took it up to working pressure with the hydro pump to make sure all was tight. Water was dropped to a third glass.

In true UK tradition, I lit it off with Kingsford Match Light Charcoal ... 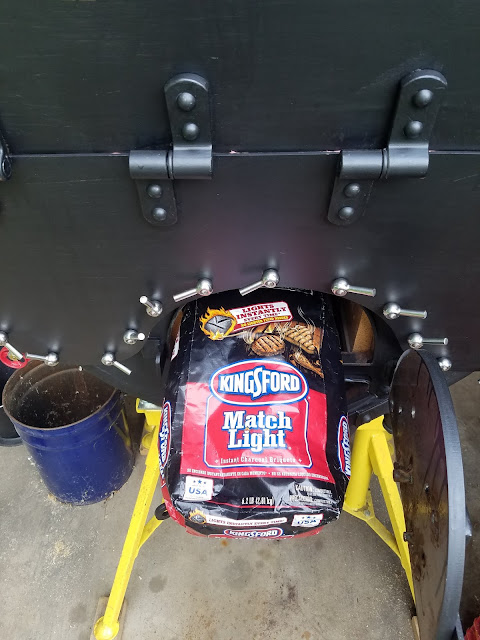 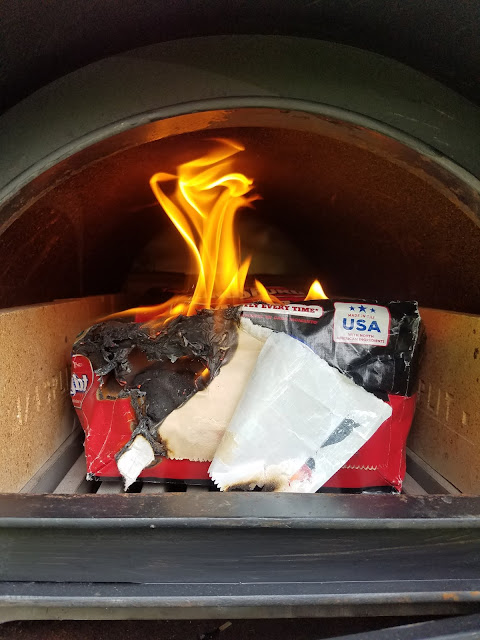 In short order, the fire was over the grates and coal was added: 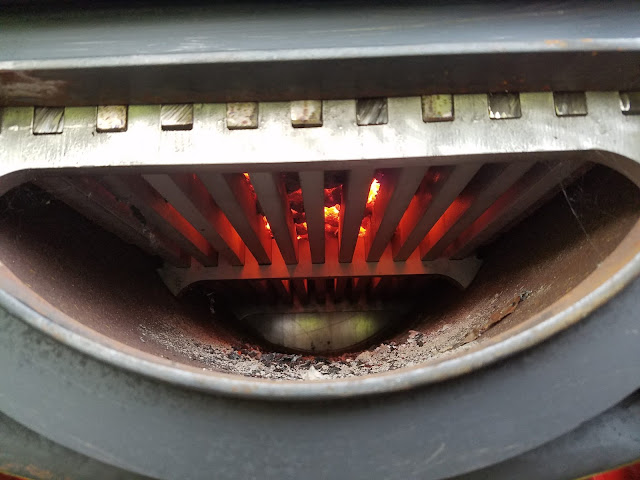 Here's looking up through the stainless grate bars at a hot fire. In an hour, I had drafting steam, but didn't force it because I wanted to see how it would do naturally aspirated. In two hours, we were at warming through pressure (100-125), and shortly thereafter, the safety let go at 200 psi: 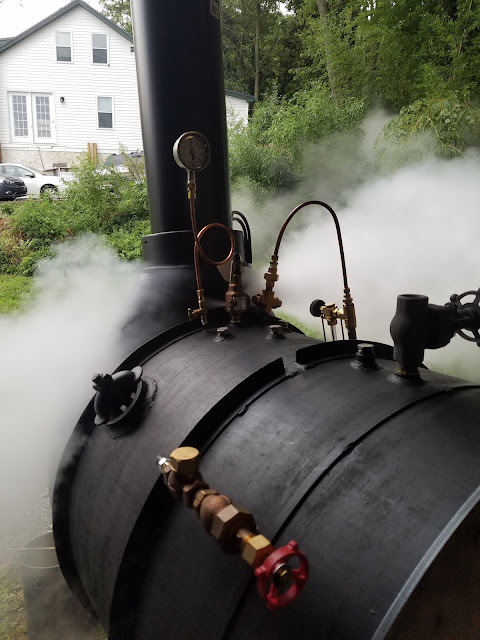 I had told the Mrs, "Watch the neighbors (whose house you see) come running when the safety lifts." "Hey! You all right?!" "Yup. Just the safety." Another typical suburban Saturday ...

A rain storm hit while we were firing things up. So the boiler was rained on, not for the last time: 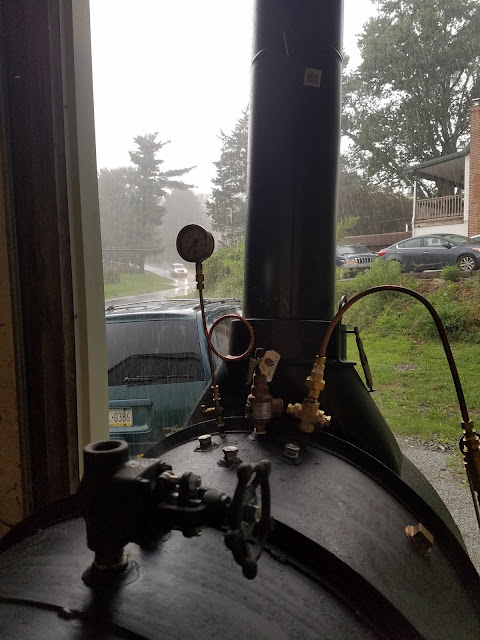 Some data:
- Combustion chamber door never got above 350 F, so I'm pleased with the plenum insulation, etc. The door itself is still rather plain. So I'm imagining some bronze hand rails, a warming shelf for baked goods and maybe an espresso maker if I can figure out how to pipe it.
- The boiler is more efficient than I imagined. The smokebox and smokebox plenum never got above 350 F. This will change under forced draft. The permanent stack will have a pyrometer so it can be monitored with greater precision.
- With jacketing, I expect it to be more pleasant to be around. It was a hot day ...
- Anthracite firing went as planned. This was pleasing as it is a compact and hot fuel. Plus it is local. A scuttle and a half (twenty pounds?) brought us to working pressure.

So this is the summer of the boiler. It was sitting in the corner, collecting dust so I wanted to finish it.

First to be finished was the smokebox: 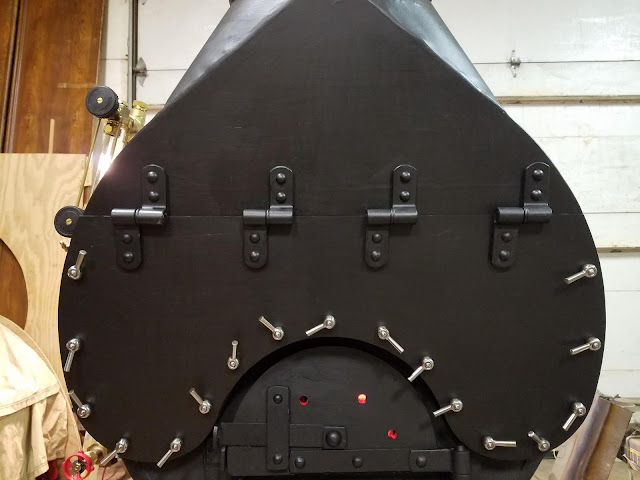 That's not a fire in the furnace. The shop is humid so a heat lamp keeps the local dew point from condensing on and rusting the steel. As was typical, the smokebox door is hung on hinges and secured with dogs. It can quickly be unsecured and swung up to snug a tube, clean the tubes or whatnot. The unfinished water glass is to the right.

Here's another picture of the smokebox end with a temporary stack for fire up: 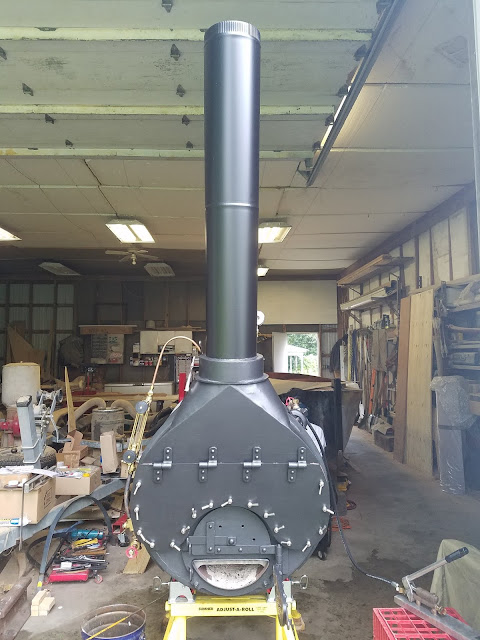 Next was to finish the grate bearers and the grates. The grates are solid bar, UK style. In this photo, the firebrick is visible lining the combustion chamber. For anthracite firing, fire brick is essential for retaining and reflecting the heat. For hardwood, they could be taken out except for the furnace end wall. 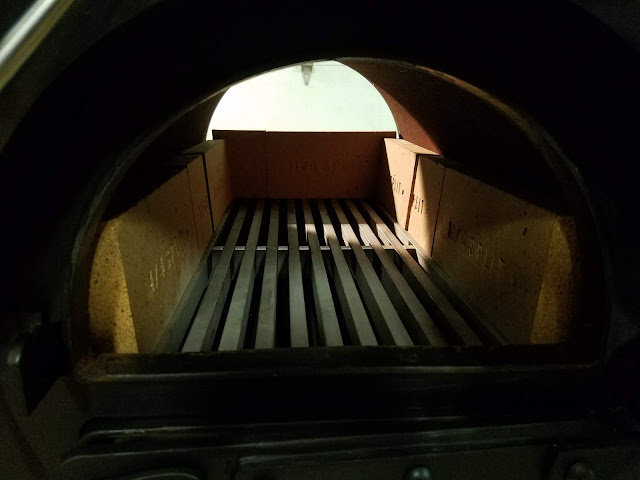 The grate area is two square feet with the brick in. Below's a picture of the combustion chamber before the reflective plenum is placed in. After the plenum was in, I sealed everything with a 5,000 F goo. 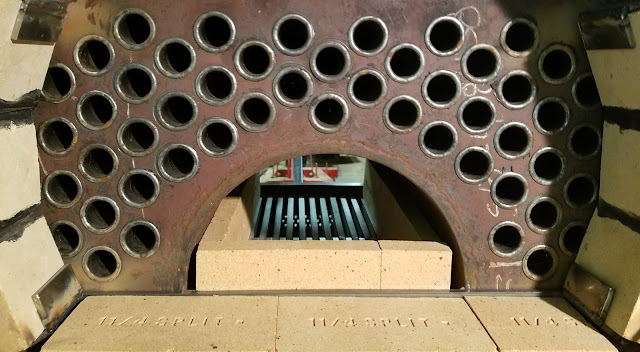 The refractory brick is shown before I covered all of the supports with cement.

Here's a shot of the outside: 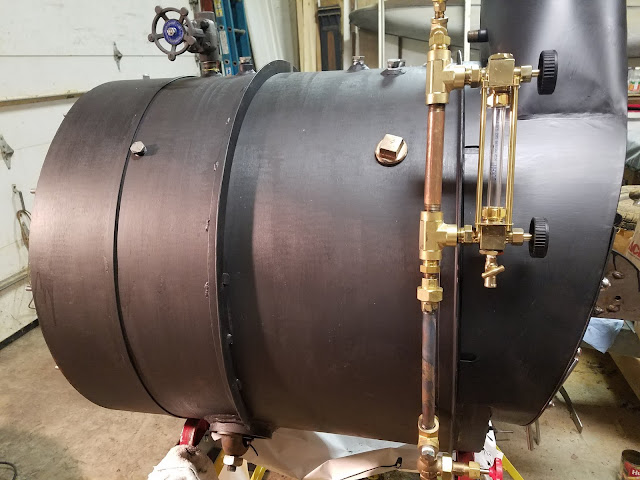 Items of note: There's the combustion chamber seam cover strip to the left. Two angle iron supports, center and front behind the glass will support the jacket later. The insulation will be an inch thick. No one should have a cow about the piping. Except for the schedule 80 steel nipples, it is all class 300 bronze and brass.
Posted by Unknown at 8:03 PM No comments:

Picked up some pumps ... Here they are on their pump platforms: 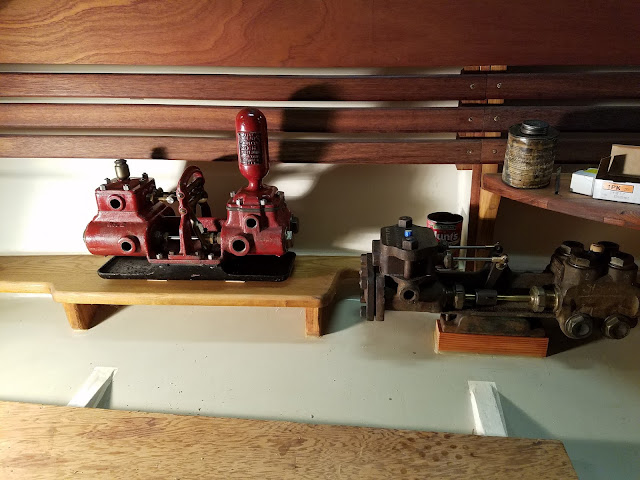 They were rebuilt by Kelly Anderson. Here's a shot of fitting the jacketing on the engine with temporary brass machine screws. It is finished now, though I don't have a picture. The jacketing is nickel with stainless screws. 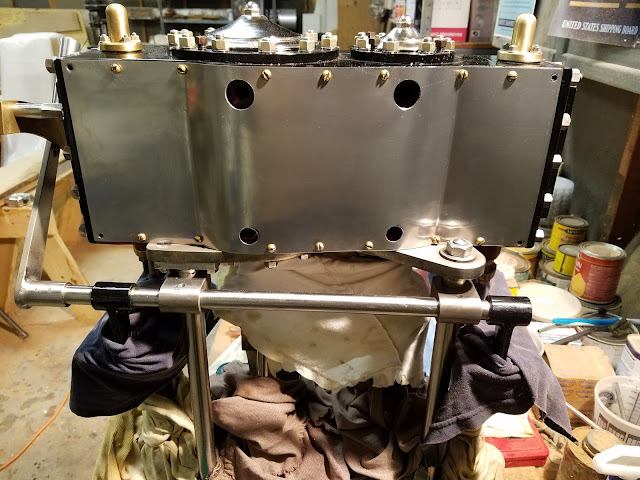 Posted by Unknown at 2:31 PM No comments:

Catching up Around Here

So, receiving requests for updates, I'm going to post photos without a lot of commentary ... Boiler front, June 2017: 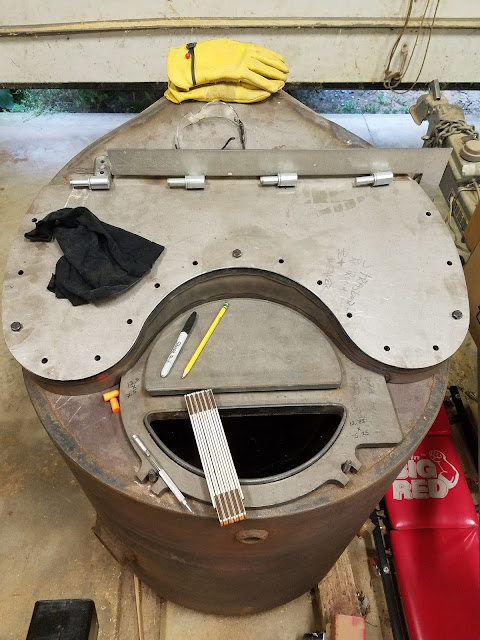 Feedwater pump platform with pump template. The platform is made out of sassafras ... 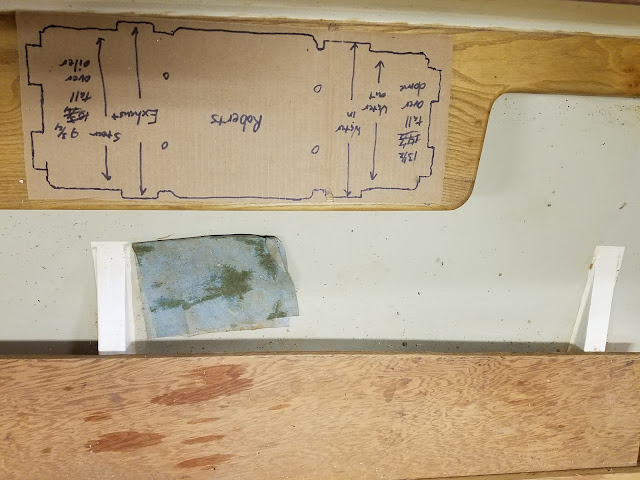 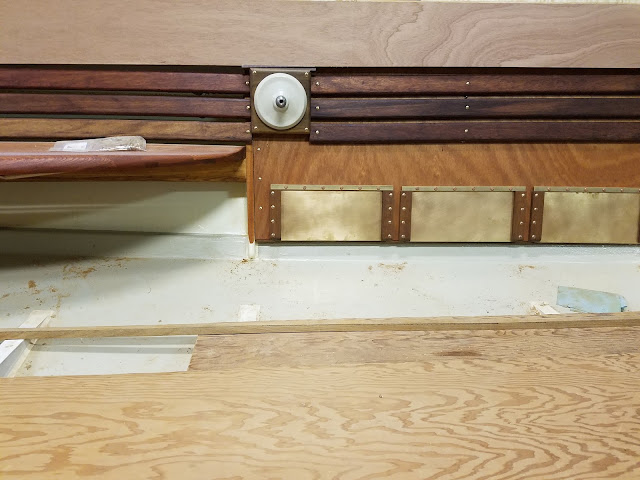 Portside aft seat made out of a chestnut church pew. One can see I am also fitting the rear of the coming. It will get a steamed white oak cap. 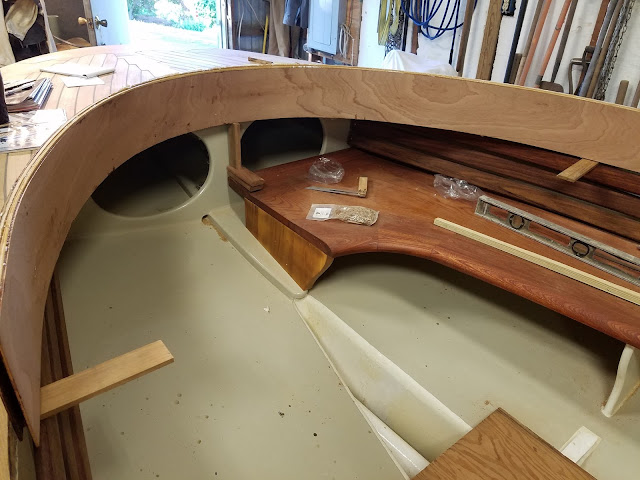 Lastly, some eye-candy, the forward deck and fitting some chocks: 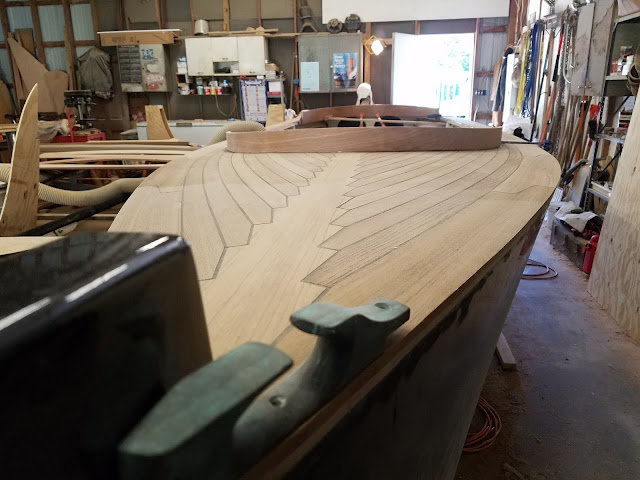 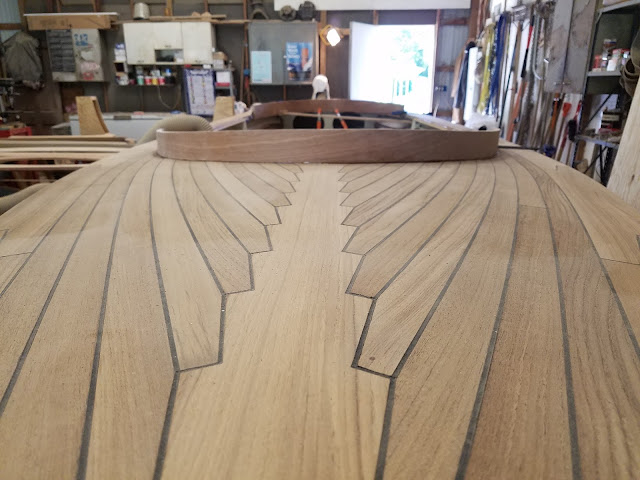 Posted by Unknown at 2:22 PM No comments:

One can see where this is going - the aft seat concept in place, it was time to move to the fore seat template and strakes. As for the rear seat, I made a template out of CDX that was lying around and fit it forward. Here's a photo of the port, fore seat template in place and fitting the port strakes: 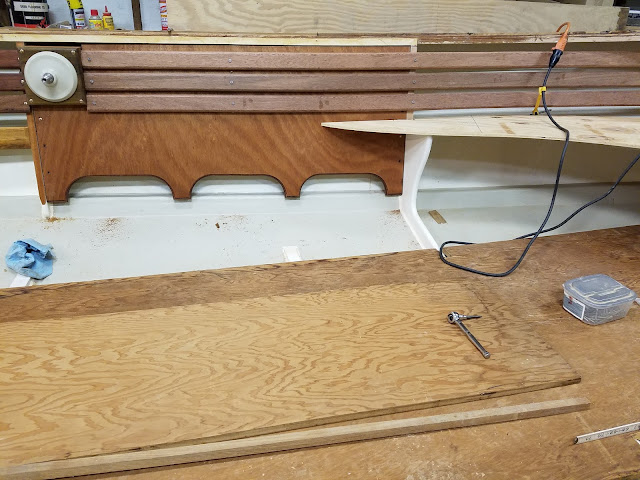 I threw some old 0.75" plywood I had lying around onto the floors. I was tired of sliding on saw dust into the bilge. The strakes aren't as loopy as the photo makes them out to be. Must be some kind of camera phone distortion going on ... Another shot looking forward: 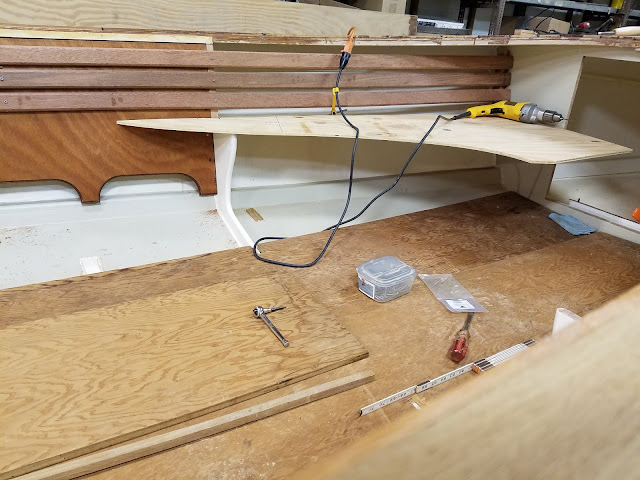 Everything is being made so it can easily be taken out of the hull for refit, renewal and whatnot. Hence, the reliance on bronze fasteners and seats made in halves. Once the seats are all finished, they'll come out anyway for primary piping runs and setting the boiler. The doors for the feed-water compartment, fore, are also finished. A photo of them will have to wait for another time.

Posted by Unknown at 9:53 AM No comments:

Iona will be fitted with two wing bunkers for coal. Each bunker will be accessed through a bronze deck scuttle. The bunkers carry around 100 lbs of coal. We'll see some day how far that gets us ...

The bunker bulkhead is made out of mahogany marine ply 0.625" thick. The below photo shows it being fitted and mounted with temporary stainless screws. The bronze gates and slides are not yet in place. 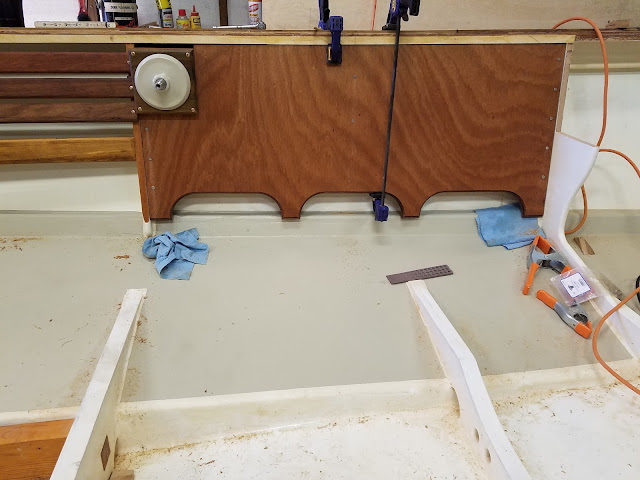 I forget whether I mentioned earlier - the steering station is a standard Edson bulkhead mount. We had to re-machine the spindle for an antique wheel out of Greenock on the Clyde.

Once a gate on the bunker is raised, the coal will spill out on the deck plate. Here's another shot: 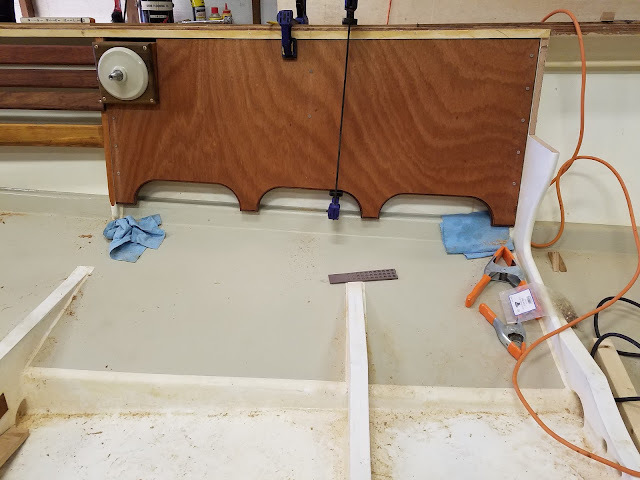 Posted by Unknown at 9:37 AM No comments:

In the midst of fitting the seat backs, the steering gear was connected for good and the helm station finished. Here is a shot of the gear connected to the bulkhead steering box: 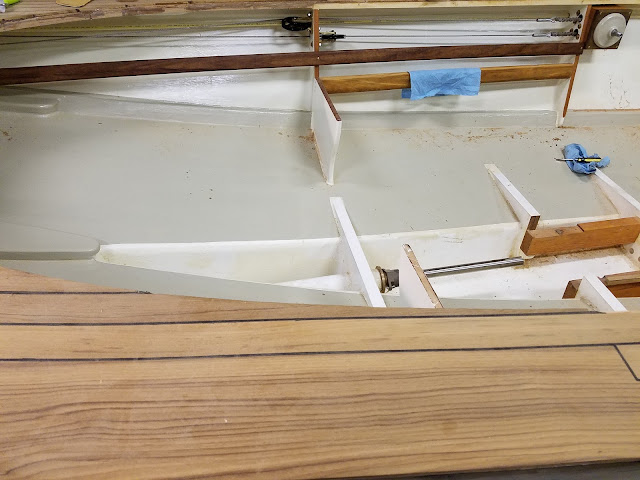 The bottom seat back strake is in place and finished with my interior finish: raw linseed oil, turpentine and pine tar.  A heavenly aroma now fills The Works. Here's another shot of the steering station and gear: 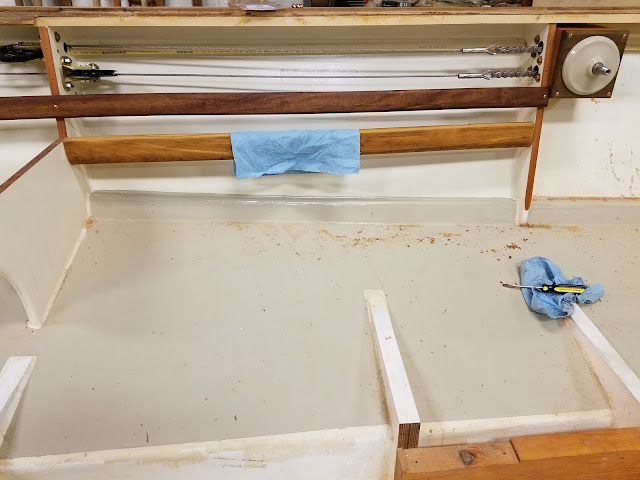 The conduit behind is for 12vdc if we ever go there ... Two other shots of the finished seat backs: 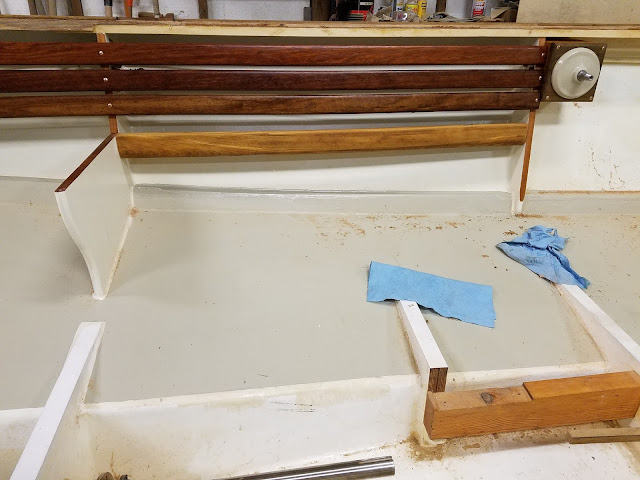 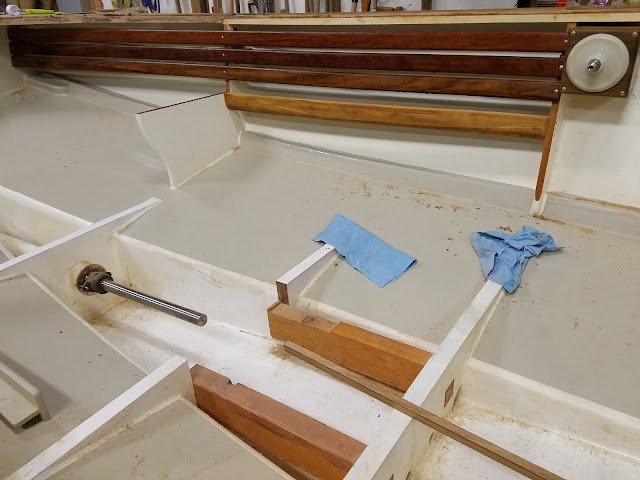 Posted by Unknown at 9:20 AM No comments: